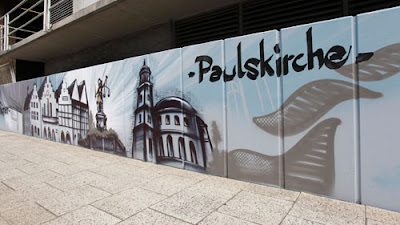 Graffiti is not usually a welcome addition to buildings and pavements, but Frankfurt Airport has made an exception by calling in a celebrated artist to use it to decorate one of its most viewed sites – a 320 metre long wall next to the bus station by Terminal 1.

And celebrated artist Helge 'Bomber' Steinmann has done them proud with his eye-catching graffiti work that depicts different views of Frankfurt.

Among the 15m high x 20m wide images on his 'canvass' are the Römer city hall and Alte Oper (Old Opera) concert hall.

He also pays homage to the city's football team, Eintracht Frankfurt, and the zoo. According to the gateway, "the somewhat unusual piece of artwork culminates in a depiction of Frankfurt Airport at the eastern end of the mural". 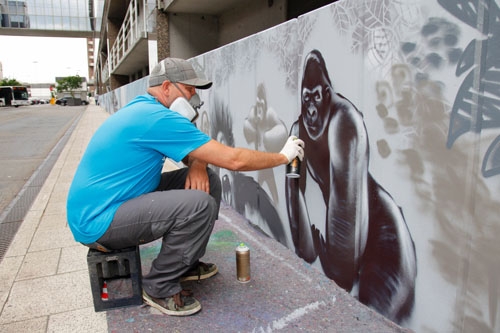 Operator, Fraport AG, views the mural as a celebration of the city of Frankfurt, claiming that guests from all over the globe need take only one look at the mural to immediately recognise that they have arrived in the city.

It adds that although "opinions may differ regarding the style (as with any work of art), whatever the case, this graffiti is most certainly an unusual eye-catcher, lending the airport a generous touch of distinctive local colour".

The mural is yet another element of Frankfurt Airport’s 'Great to have you here!' service quality programme launched by Fraport with the aim of continually enhancing the travel experience at Germany’s largest aviation hub.
Airports Frankfurt graffititi
Location: Frankfurt, Germany