A History of more than 4000 years of Taxes to learn from, yet the EU remains on course for economic distaster 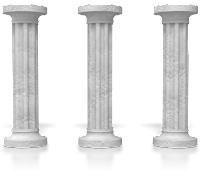 A brief History of 4000 years of Taxes

Once upon a time
In the early days of so called Human Civilization the Tax base endured an extortionately high intolerable level, which in fact was in the 100% Tax bracket. Not surprisingly the people dominated by it were called "Slaves". The people that the Slaves worked for were the original founding Tax collectors who comprised of various types of Nobles. The Nobles acted on behalf of and reported to the Kings that maintained a dedicated bloodline to keep the wealth and control of people in the family.

Alexander the Great
Then one day seemingly out of the blue to many at the time, came "Alexander the Great", leader of the mighty Macedon Army. "Low Tax Alex" as he was aptly known by many during this period in world history, proudly announced wide ranging Tax cuts for everybody that supported him without a the need to fight for the territory he desired to control. In reality this meant the following:- No more...

Revenue enhancements (this category was in the past created out of nowhere or anywhere in times of austerity or domination to make money for the ruling class).
Alexander the Great made a brilliantly simple offer to the world at large: Pay my army 10% and keep the rest. Then he promised to destroy all of the Tax collectors. The Army of Macedon marched into the Tax Service Centers of Persia, Asia Minor, Egypt and the rest of the known world sacking and burning them. Cities everywhere built elaborate monuments in honor of Alexander the Great, before his army even arrived. Literally everywhere in the civilised world desperately pleaded "Please, conquer us, too".
During the reign of Alexander the Great the world over enjoyed explosive economic growth, creativity increased and notable cultural advances were also made. Then one sad day alas, Alexander passed away.
The Greeks
The Greeks then took over and initially showed promise in terms of mythology, language, democracy, astronomy, medicine, the arts and philosophy. However, during the following few hundred years, a series of progressive rulers slowly raised taxes and cooked the people of the time like Frogs in boiling water with an array of complex Taxes. As a result the Greek Empire inevitably collapsed. For Greeks today this sounds like Deja Vu.
The Romans
The Romans subsequently took over, with the promise to lower taxes to anyone that surrendered without a fight. Everybody naturally joined and why not? This is of course except for a few socialists at the time in Israel whom they duly crucified (thats another story).

The Romans bravely decreed that the world would be Taxed at an extremely low rate. Moreover, all Italians at home would pay absolutely no Taxes at all. Not surprisingly. the Roman Empire advanced throughout the civilized world, bringing prosperity, law, and culture.

Rome itself evolved into one of the most advanced, cultured and swinging fun cities the world has ever known. The Romans even set up offshore Tax havens such as Delos (close to Mykonos) and a few other places.

A few centuries passed and sadly new generations of Roman rulers unable to see the bigger picture shut down the offshore centers, raised taxes and this wonderful empire duly collapsed.

The Vandals
Europe was taken slowly taken over by a new set of Tax collectors. They were appropriately called Vandals. This mottly and savage bunch believed in 100% Tax followed by certain death for the Taxpayers. This of course did not support the Tax base and the world moved backwards.

Despite courageous Tax relief crusades by Attila the Hun and Ghengis Khan respectively, an era of high intolerable Taxes collected by feudal lords in addition to the Churches of Europe prevailed for centuries. It was called "The Dark Ages". Reason being, nobody could afford to turn on the lights!

The Arabs
During this period, the Arabs progressively took over most of Europe, except for areas around France and Germany. Under their benevolent despotism and low Taxes, people enjoyed great prosperity. Actually, the majority of Christians enjoyed being ruled by the Arabs who were at the time more efficient than the feudal lords.

The Arabs believed in free enterprise, freedom of expression and thought, tolerance and of course low Taxes. They did not force people to join their Mosque. Arab Taxes had 20% as the upper limit.

Then a few isolated trading communities not yet conquered by the Arabs such as Venice in Italy cut their Tax rates to fuel trade and commerce, which duly exploded. Low taxes brought wealth and joy everywhere.

The Spanish and America's
The Arabs were overruled on the prospect of lower Taxes. In order to deliver on promises, the new Spanish kings supported the voyages of Columbus and America was discovered. Sadly, 100% of Taxes were imposed on the native indians who were worked to death to send Gold and rishes to the Europeans back home.

Where there was no Gold, local European Colonists had to work extremely hard. An American Tax revolt ensued which threw out the British. It took 125 years to get Taxes back to where the British had them, but the Democrat Party was formed and they duly raised taxes.

Everybody who loved freedom headed west for the new Frontier. Tragically, by 1914 the frontier was closed and as there was nowhere else to hide, Congress passed their own version of American Income Taxes. We all know what happened then!

Back in Europe
Many productive people including Ernest Hemingway and Gertrude Stein, left for Paris. Then the French put up their Taxes to pay for the Maginot line, a group of dancers at the Follies Bergere and other frivolous projects.

World War I
Tax rates shot up throughout the world. Everybody was feeling angry, so we had World War I. After the war, a reparations Tax of 100% was imposed on Germany. They could not possibly pay, so German industrial and mining areas were seized by the French.
This was not enough for the greedy French of the time who actually expected to be paid for the war damage. So the lifetime savings of all Germans were confiscated through an inflation Tax. It was still not enough. Taxes went up all over and the world and depression followed. Germans owed several times what their properties were worth. Foreclosures were rampant, unemployment was total, and anarchy threatened.
The Communists were the largest party in urban areas and hope for the future was gone.
World War II
Germany cried for "a saviour on a white horse". In rode Adolf Hitler. He wanted to be the world's unique Tax collector. He (like many nasty conquerors before him) liked a 100% Tax rate and anyone who was not ethnically German he wanted either dead or in slavery.

Some people did not agree, so they were sent to the gas chambers and paid 100% Tax along the way. To avoid this fate, much of the rest of the world collaborated to oppose Hitler and then came World War II.

Germany and Japan
After the war, defeated Germany and Japan were force-fed the American Tax code with the high 1945 Tax rates. For 10 years, the defeated nations literally got nowhere. They produced only junk, poverty and unhappiness.

Then Germans negotiated to keep the existing Tax code, but asked for one little loophole: for all overtime pay to be Tax free. the Japanese did something similar by making all investment profits, dividends and interest earned on savings Tax free. This encouraged wealth creation.

Suddenly, with the possibility of getting rich legally, the once disincentivized Germans and the copycat robotic Japanese became innovative, creative and hard-working again. Their economies duly soared.

Red China
Meanwhile in the red Communistic world of China they were experiencing consecutive famines. The Tax rate on communes was cut by the Commies (who got something right for a change!) from 100% to nothing. Agricultural production exploded. Soon China was no longer starving, but they were exporting food. Then they started economic free zones where all the Chinese who lived there at the top became millionaires, while those under traditional communism still stagnated.

America
Meanwhile, in the USA, when the Kennedy Tax cuts went into force, the economy and Tax revenues grew so fast that America had its only balanced budget since World War II.

Then more negative Presidents like Johnson, Nixon, Ford and finally Carter meddled with Taxes and created a series of so called fiscally responsible Tax reforms (which is another way of saying Tax rises). Naturally, the American economy turned into a complete mess.

Ronald Reagan came in with a simple yet prosperous alternative and cut Taxes. The American economy expanded. New jobs were created faster than anywhere on Earth at this time. The only problem was that the Democrats in Congress kept spending money (welfare) on marijuana-smoking degenerates faster than it could be collected.

Great Britain
Meanwhile the UK suffered from EC imposed socialism.The UK actually nearly became extinct when Tax rates were up in the 98% status. Margaret Thatcher saved the day, when she immediately slashed Tax rates and eliminated the socialism that kept the country back. Every day in England until Thatcher left, the future looked brighter than it did before.

Except for the worst countries of the third world, Tax rates were, were for a while, dropping around the earth. Communist countries, with nothing to lose but their chains, were cutting taxes and worshipping at the altar of capitalism. But their mentality was so warped by Communism that they still do not have it wuite right.

EU
Steadily the Tax rates have risen across the EU since inception and we are now moving into a period of depressing austerity and economic crisis. The European Common Market was a popular idea which is what most voters actually thought they were getting into. Now there are unelected commissions, the powers of each member country are diminishing and even if a country votes NO to further integration, the EU spends more of Tax-payers money on marketing to support a new YES campaign to turn around and then ignore the original NO vote. This happened to Holland, Ireland and even France, but most countries did not even get a referendum or choice.

Greece, Portugal, Spain, Italy and Cyprus are reaching the point of economic collapse. They will all need billions of euro more than what has already paid to bail some of them out. The only answer from the EU is to apply more of the same austerity and Taxes, which of course will kill growth and bring each of these nations to eventual collapse if not the whole EU if countries follow this suicidal course, if history tells us anything. Put good money after bad never works and historically speaking one could never get out of debt by adding more debt.

Clearly the leaders across Europe have a profound lack of respect for History and of course Democracy.

New World Order
What we are seeing now is a slow inexorable move towards the New World Order. Here an American Union, European Union, African Union and Asian Union will all ultimately report to the World Union for ultimate control of our Planet. You can guess what Tax rate will be applied if the new World Order ever happens and chips are inserted into the fabric of our skin to monitor and control us.

Fortunately, there is an awakening going on across planet Earth which offers some hope for the future. Time is running out though.
Best of PT
Location: Rome, Italy