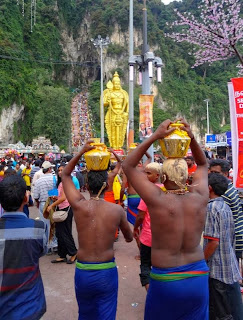 When? 17th January 2014
Thaipusam is a significant Hindu annual ceremony held during a full moon within the tenth month of the Hindu calendar (mid-January to mid-February in the Gregorian calendar).

It's marked in Malaysia by a public holiday and celebrated by the Hindu people of South India and the mainly Tamil-speaking Hindu communities throughout Malaysia. Thaipusam is dedicated as a thanksgiving to Lord Subramaniam for answered prayers in addition to being a day of penance.

At Thaipusam, one can expect to see parades and rituals across Malaysia, and witness devotees performing ceremonial acts, the most famous being at the Batu Caves in Kuala Lumpur, where more than a million people gather for Thaipusam each year. Visitors are attracted by the vibrant colours, cultural noise and the wide range of activities taking place during Thaipusam.

What is considered to be the greatest dramatic attraction, is when devotees (who made a vow during the previous year), redeem themselves by carrying ornamental structures (called Kavadi) attached to various parts of their bodies by hooks and steel spikes, which penetrate flesh. The Kavadi also contains 2 small pots of milk, which are used to bathe a statue of Lord Subramaniam. The devotees coat their bodies with holy ash, wear saffron robes, and may insert metal skewers through their cheeks and tongues.”
Events Worldwide
Location: Kuala Lumpur, Federal Territory of Kuala Lumpur, Malaysia