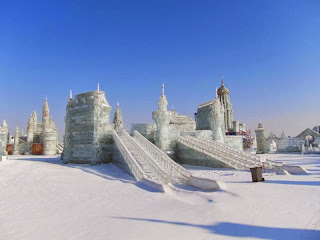 The Harbin International Ice and Snow Sculpture Festival is set in Harbin, China during the coldest months.

This awe inspiring Festival features breathtaking temporary works of art, all created with ice from the Songhua River. Between the 4 primary parks and amusement zones, there are a few thousand pieces, not to mention all the ice architecture created throughout the city for the winter (it's everywhere you look).

The Festival lasts 2-months between January and February and is a must-see for families. It gives a whole new meaning to the concept of a Winter Wonderland. During this time more than 15,000 people carve (by hand or laser) more than 4 million cubic feet of ice. One can expect to experience scaled-down versions of the Forbidden City and the Great Wall to simpler student-created pieces, the sheer volume of beauty is staggering.

The Ice Lantern Festival was actually the precursor to the current Festival, which first started back in 1963, however it was put on hold during the Cultural Revolution. A few hundred years ago, during the Qing Dynasty, local fishermen would typically hollow out pails of ice and put candles in them for light at night. Over time, lanterns went from being strictly functional to being an aesthetic fixture.

Today the festival comprises a combination of art and science that creates the elaborate and ornate ice and snow spectacle. Deionized water is used on some pieces to produce ice as transparent as glass, and multicolored lights add multi-dimensional depth and beauty.
Best of PT Events Worldwide
Location: Haerbin, Heilongjiang, China