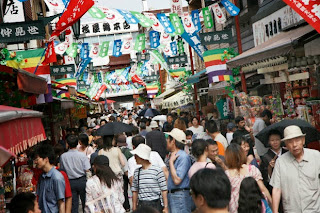 Description
The Takayama Festival (Takayama Matsuri) is ranked as one of Japan's three most beautiful festivals alongside Kyoto's Gion Matsuri and the Chichibu Yomatsuri. It is held twice a year in spring and autumn in the old town of Takayama and attracts large numbers of spectators, in order to celebrate the change of the seasons.

Main attractions of the Takayama Festival:
Display of festival floats
From morning to late afternoon festival floats (yatai) are displayed in the streets of Takayama.

Karakuri Performance
Several of the festival floats are decorated with so called karakuri ningyo, sophisticated mechanical dolls that can move and dance.

Mikoshi Procession
A portable shrine (mikoshi) is carried around the town in a parade during the two days of the festival, starting and ending at the respective festival's shrine.

Evening Festival
In the evening of the first day, the festival floats are pulled through the streets of Takayama's old town for about two to three hours. The evening festival (yomatsuri) is considered the festival's highlight by many visitors.