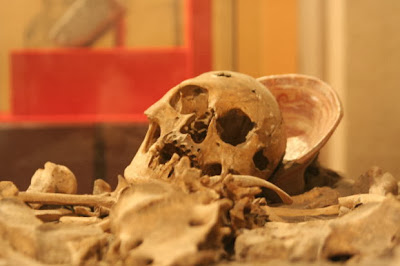 It's a fact that while travelling, the majority of us are used to carrying a lot of unnecessary things that we are probably not going to use during our vacation or business trip. However, there is no reason to feel ashamed! Perpetual Traveller Overseas is proud to present you with some of the strangest things that airport security has seized, while conducting a search on luggage.


1) Tiger cub
A woman in Thailand was carrying something inside her luggage while travelling to Iran that airport security deemed suspicious. They thought it was a teddy bear in the beginning but when her suitcase was opened they discovered a little 3-month-old tiger cub! This cute animal had been drugged asleep and placed in a bag. According to the woman, she had been planning to sell it in Iran. Luckily, it was in healthy condition and sent to an animal protection centre to find love and care.

2) Skeletons
In Munich, security spotted something suspicious while scanning a suitcase. After opening the bag, they found that the suitcase's owner had been carrying the bones of her brother, who had died 11 years ago. As she explained, she was planning to bury her brother in Italy. Surprisingly enough, they were allowed through inspections after all the necessary documents were presented to the authorities.

3) A Baby
The baby was found alive, luckily. The parents told airport security that they had placed their child in the suitcase because they hadn't had the necessary documents and Visas in order to take the child with them. The couple has been accused for exposing the baby to radiation.

4) Pigeons
What is really peculiar about this case is not that a man was carrying pigeons but the fact that he hid them in his pants and tried to pass through security. As something seemed suspicious about him, they ran a body search and discovered in his pants pigeons that were placed in large envelops!

5) Snakes
A woman tried to transport a python and thought it would be a good idea to hide it in her bra. However, security thought it rather suspicious that she was scratching her breast constantly while waiting to show her passport.
Airports Disturbing Behaviors Travel
Location: United States