10 of the Most Luxurious Yachts Ever Made 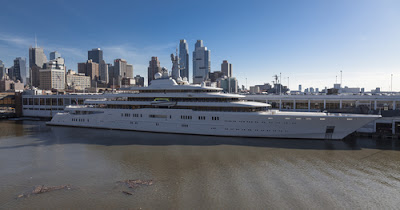 Luxury cabins, swimming pools, artificial beaches, hot tabs, submarines and disco halls are some of their extravagant attributes that guarantee an unforgettable experience for all those who can afford it.

We have searched and we present you below 10 of the most luxurious and large yachts ever made!

10. Annaliesse
Annaliesse is a 280-foot yacht and has designed to accommodate up to 36 passengers, offering them luxury and safety. This yacht is owned by Liveras Yachts Company and can be hired at the price of $661.500 per week. So, If you don’t have the money to buy it, just rent it!

9. Alysia
This specific yacht has many similarities with Annaliesse but is said to be more elegant and stylish. It has one private cabin with its own balcony, jacuzzi and king size bed. At the same time, there is a spa, gym, living room and a huge cellar that can fit up to 500 bottles. This can be hired as well at the price of $100.000 per week.

8. Exstasea
This yacht was sold by its original owner Roman Abramovich, the owner of Chelsea’s football club in 2009 to a philanthropists for $200 million. The yacht was built in the shipyard of Royal Van Lent and has length of 282.0 ft. It is made of all steel, and is much closer to be a luxury ship, rather than a yacht. Can accommodate up to 14 passengers and has 6 private cabins.

7. Pelorus
Pelorus is a 377 ft yacht and is said to be one of the most luxurious yachts worldwide. This used to be owned by Roman Abramovich too, who sold it to David Geffen. Details about the interiors are limited, as Abramovich was protective of his family's privacy and highly security conscious.

6. Octapus
Octopus is a 414 foot (126 m) yacht and is also owned by Paul Allen, the co-founder of Microsoft. Until 2003 was believed to be the biggest yacht that was ever constructed worldwide. It has 2 helicopter decks (one in the front and one on the back), a large pool and two submarines!

5. Rising Sun
Rising Sun is one very modern and large 5 storey yacht designed by Jon Bannenberg. It was first purchased by Larry Ellison the CEO of Oracle Corporation and now is currently owned by David Geffen. Rising Sun is also one of the biggest yachts globally with a length of almost 138 meters (453 ft) and is equipped with 82 rooms, Jacuzzi bathrooms, gym and sauna, wine cellar, private cinema and ... a basketball court on the main deck!

4. Lady Moura
Lady Moura is a private yacht owned by Nasser Al-Rashid, one of the most richest businessmen worldwide. It has 344 ft length and is even decorated with gold! What is more, the specific yacht has an artificial beach with real sand and is the permanent residence for the owner and his family and costs about $210 billion.

3. Dubai
Dubai is the name of a yacht currently owned by Sheikh Mohammed bin Rashid Al Maktoum, the monarch of the Emirate of Dubai and the Prime Minister of the United Arab Emirates. This 524 feet ship was built by the German shipbuilding companies Blohm and Voss and Lürssen and can accommodate up to 72 guests and 115 crew members.

2. Eclipse
Eclipse is believed to be the largest and most expensive yatch globally. Its exterior and interior were designed by Terence Disdale Design and its naval architect was Fancis Design. It is 536 ft long and has two helicopter decks, 24 guest cabins, 2 swimming pools, several hot tubs and a disco hall! Also, the specific vessel is equipped with tree launch boats and a 50 meter submarine!

1. Azzam
Azzam is the biggest private yacht so far and was built by Lurssen Yatchts. This huge yatch was launched on April 5th, 2013 and is 590 ft long . The ship is rumored to have about 50 suites and a 95-foot salon, among other luxurious features.
Yachts
Location: Dubai - United Arab Emirates