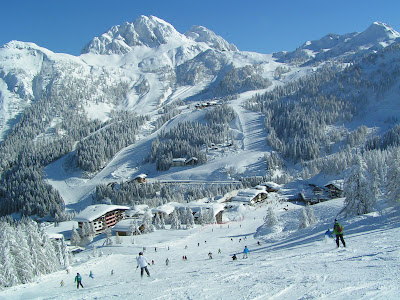 It’s hard to believe but until the seventies Austria used to pip France as the European skiing destination with the most visitors. Now, after a period in the doldrums the old Alpine rival is back. Alongside the resurgence of classic spots like St Anton and Kitzbuhel, the abundance of Ellmau ski deals and the attraction of family resorts like Soll and Alpbach are persuading more and more back to the Tyrolean slopes.

The reason: What made France pre-eminent, Austria has now imitated. They have a huge ski area, linked by cable cars and lifts, offering hundreds of kilometres of pistes of all different levels. That area is the Ski Welt, Austria’s largest interconnected ski zone.

One of the lower resorts in Ski Welt is Ellmau, the perfect place for families or newbie skiers and boarders to start. Slopes are accessible in the village itself, with plenty of gentle runs for beginners. Those with a bit more confidence can take the train up the Hartkaiser mountain behind the village. From the top there are several green intermediate runs and a challenging red run back down. Alternatively, taking the Koglbahn or Tanzboden chairlift accesses the almost unlimited options of the main Ski Welt area via the Scheffau runs. Accommodation in Ellmau offers several options, including low cost pensions, guesthouses, and chalet deals which may suit families and groups.

A different, but no less good value choice of resort is Soll. Skiers who stay here have the advantage of starting out in the heart of Ski Welt’s smorgasbord of pistes. The resort’s reputation for budget skiing accommodation actually goes back years, but now the quality has improved with the result of more families added to the previous laddish vibe. Start of the slopes is a kilometre by bus or car out of the village. Taking the gondola up the Hohe Salve mountain leads to some interesting red runs back down. There are also three black runs including one off-piste between the trees underneath the route of the gondola.

A third option for the Austrian low budget skier is Alpbach, in the Inn valley between Innsbruck and Salzburg. While having a reputation as a ‘beginners’ resort’ there are in fact a surprising number of tougher routes, only increased by the new ‘Ski Jewel’ link to the neighbouring Wildschonau area. The village itself is small, but for its size it offers a good range of accommodation options.

There are many others to choose from: Ski Welt alone has twelve different villages. But these are three resorts that should not disappoint - and are part of the reason why Austria may be reclaiming the crown of Europe’s skiing capital.
Destinations Travel Worldwide
Location: Austria