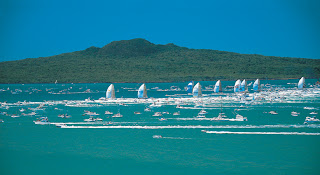 The Auckland Anniversary Regatta, New Zealand is the largest single-day regatta in the world and the oldest sporting event in New Zealand.

The very first Auckland Anniversary Regatta took place in first 1840 to commemorate the the founding of the province, and ever since it has grown to become one of the world’s largest single day regattas.

A great yachting event for sailors and spectators who can view the maritime and trading history of Auckland in action.