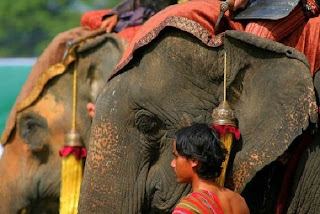 Surin, the northeastern province known as ''the Land of Elephants'', has been holding the annual Elephant Roundup for nearly half a century. Internationally famous, the annual event brings thousands of visitors to the Srinarong Stadium in the provincial city of Surin, where some 200 trained elephants are assembled.

Among the spectacular shows are elephant football, tug-of-war between elephants and men, demonstrations of log-pulling skills and a spectacular parade of elephants outfitted for medieval warfare.
Further information: www.elephant-news.com
Events
Location: 2333, Nong I Yo, Sanom, Surin 32160, Thailand