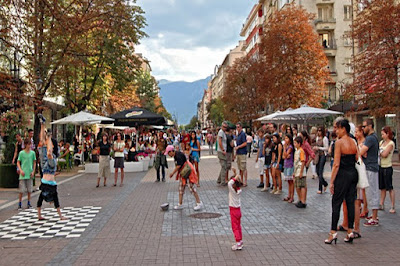 The European Backpacker Index has been updated for the 2017 edition. With Europe still experiencing troubled times and the masses starting to cut back on travel, this index is highly relevant and monitored by thousands of travellers visiting European destinations.

Europe continues to be home to many of the world's most expensive cities, as well as some bargain cities where many things cost only about a quarter as much for an international traveler. Now in its 7th annual edition for 2017, the Europe Backpacker Index ranks 56 of the continent's most popular cities from cheapest to most expensive.

Thanks to a stagnant economy and virtually no inflation (except for a few countries), prices for visitors in Europe held very steady throughout 2016. Iceland keeps getting more expensive, partly due to its soaring popularity. And Britain is now a relative bargain after the post-Brexit currency weakness. That probably won't last too long, so don't put off your next London visit.

For tourists holding US Dollars, Europe continues to be unusually cheap. Those who track exchange rates over the years will know that they tend to swing back and forth. In other words, in a few years it's very likely that Europe will feel much more expensive for Americans than it does in 2017.


How does the Backpacker Index work?
Prices for most things (hostels, transportation, attractions) are fixed and measurable, however prices for things like a “budget lunch” or a "pint of beer" tend to vary depending upon area, establishment and type. The European Backpacker Index still makes a great job of it and estimates are based on a comprehensive research, and in most cases are close to the right numbers, if not right on. here below is how the Index is measured...

Costs for each city

1. Sofia, Bulgaria (cheapest)
Sofia remains a fantastic bargain among European capitals, with a very pleasant city center that is quite welcoming of foreign tourists. Prices of nearly everything are very cheap, except for inbound flights from other major cities. For this reason, Sofia is out of the way for anyone who isn't doing an extensive tour of the region. Don't expect any major checklist attractions, but you can expect a surprisingly lovely urban experience at shockingly reasonable prices.

2. Krakow, Poland
Krakow continues as Europe’s best travel bargain. The low prices have drawn in larger numbers of Europeans for weekend breaks, and there’s many great and cheap hostels, bars, and restaurants to keep prices low while you are enjoying the beautiful old city and the local culture. A weak currency has offset small price increases for most.
Bucharest, Romania
Definitely not Romania's most charming town, Bucharest's Old Town gets decent reviews but the rest of the city struggles to appeal to tourists. Fortunately, those that make the effort to come will at least be rewarded with low prices all around, which certainly help make up for the other frustrations of visiting. And that huge parliament building is worth a look. Hostels seem to be getting cheaper lately, so it's even more appealing for the backpacker set.
Belgrade, SerbiaBelgrade is one of the Balkan cities that had years of trouble in the 1990s and still struggles a bit to attract tourism. This is another where you won't find an abundance of checklist attractions, but you will find a lively and interesting urban center with good nightlife and appealing prices.

Budapest, Hungary
Another excellent travel bargain, Budapest is all-around cheap as long as you steer clear of the most touristy places along the river. The castles and cathedrals are enough, but here you also get thermal spas that are cheap even for the backpacking set. Hostels, in particular, are great value, but you have to get a bit out of the center to find inexpensive hotels. Sarajevo, Bosnia and HerzegovinaAnother Balkan-area city whose name conjures up images of its past troubles, Sarajevo is a destination that is struggling to attract tourists. The location deep into the mountains is remote, but it's also gorgeous once you arrive. The Muslim Old Town next to the modern center is very interesting and incredibly welcoming. This one is a hidden gem, partly because it's so hard to reach. If you can figure out a way to get here, do it and see what the fuss is about.

Kiev, UkraineKiev has always been fairly cheap (and very remote) compared to the rest of Europe, but the conflict and uncertainty that Ukraine has gone through starting in 2014 caused its currency to plunge and inflation to skyrocket. It's hard to say what prices may be at any given moment in 2017, but at least it should continue to be cheap for outsiders. Hopefully the situation on the ground will feel more secure soon as well.

Český Krumlov, Czech Republic
The second most popular tourist town in the Czech Republic is another jewel not to be missed if you are nearby. Framed by a gorgeous serpentine river, the historic Old Town feels perfectly preserved yet not overly touristy. Best of all, Český Krumlov seems shockingly cheap when you are there, with hotels, food, and drinks at very low prices even in the heart of town. This place is a huge hit for Asian tourists, for some reason, though it's highly recommended for everybody.
Warsaw, PolandWhile Krakow gets most of the raves in Poland, the capital city also has plenty to brag about in addition to very reasonable prices. The Old Town center was famously rebuilt after WWII to resemble its former self, and it's as charming as it is impressive. Warsaw is a bit out of the way for most travelers, but it's very worthwhile for those touring the area.
Zagreb, CroatiaThe beach resort towns of Croatia are the main attraction, so Zagreb, which is well inland, tends to be only a short stop for most. Still fairly cheap by European standards, and especially compared to Italy next door, Zagreb is a bargain and a worthwhile pause on the way to one of the beach towns or nearby Plitvice National Park.
The following cities reached the top 20 (in order):

So next time you want to save money and plan a frugal backpacker type break, be guided accordingly.
Best of PT
Location: Sofia, Bulgaria