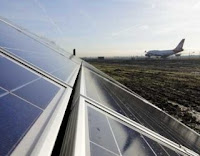 Rated at 50 Kilowatts, the solar system is comprised of photovoltaic panels that convert solar energy into electricity. It's been installed by UK group Orta Solar and not only is it a UK first but it represents just one component of Gatwick's wider CO2 reduction programme, which aims to limit the site's contribution to climate change resulting from greenhouse gas emissions.

This should see, in future years, a more extensive Gatwick solar power system put in operation.

Airport Solar Technology
Several issues had to be overcome before this airport solar technology could be put in place. These included ensuring that the system didn't produce potentially dangerous forms of glare or interrupt any of the radar signals transmitted at ground level. To guarantee that the criteria for safe operation were met, both NATS (the National Air Traffic Service) and the CAA (Civil Aviation Authority) were consulted.

Gatwick Airport was formerly part of BAA's UK airport portfolio but, in October 2009, was acquired by Global Infrastructure Partners. In recent months, the site's unveiled a host of new features including, in October 2011, a new security upgrade at its South Terminal.

Gatwick Airport Solar System
The Gatwick Airport solar system programme was kickstarted by Joe Attwood - the site's ex-sustainability delivery leader. "For a long time Gatwick Airport Ltd has been working hard to increase its sustainability and adding 100 per cent carbon free electricity generation into our operations is a positive step", Attwood explained in an Orta Solar press release.

"Although only at the 50kW trial stage at present, the system will save 25 tonnes of CO2 on our operational carbon footprint per annum."

"The system breaks new ground regarding the acceptance of Airport based solar in the UK and all involved have learned a lot regarding challenges & solutions specific to the location", Nick Pascoe - Orta Solar's Managing Director - added. "We're already speaking with other leading airport groups in the UK about bring Solar PV into their operations."