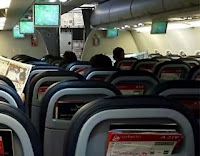 A group of four British and Irish passenger airlines have united to try and overturn current Air Passenger Duty charges in the UK.
Air Passenger Duty (APD) is levied on virtually every commercial flight that leaves a UK airport. It's applicable to the tickets brought by all travellers carried by aircraft with a minimum ten ton weight or a minimum of 20 passenger seats, although with an exemption made for connecting flights involving international destinations.


Air Passenger Duty Charges
Put into effect in 1994, UK APD was initially charged at somewhere between £5.00 and £40.00 but it's since been adjusted five times.  Now, UK Air Passenger Duty charges range from a minimum of £24.00 to a maximum of £170.00 - a price band influenced by several factors including flight length and ticket class.  That's a situation that British Airways, Virgin Atlantic, Ryanair and Easyjet all want changed and, backing their cause, they've highlighted what they consider its negative effects.

Airlines Fighting UK APD
The airlines fighting UK APD say it's essentially a penalty placed on passengers and they've put their sentiments into an open letter sent to George Osborne - the present Chancellor of the Exchequer. In it, they state: ‘For hard-working families APD is a tax too far for the privilege of taking a well-earned holiday', adding: ‘It is also a tax on tourism and a tax on business'.  ‘Aviation doesn't just drive exports - it is a major exporter in its own right with our airlines earning nearly 11 billion pounds of foreign revenues every year. Tourism is one of the UK's most important earners and is worth 115 billion pounds to the UK economy.'

"We consulted on a range of reforms to APD, including simplifying the tax and making it fairer by extending APD to private jets", a representative for the Treasury stated, in comments quoted by the BBC.

"We will say more on this in the coming weeks. It is also important to remember that the UK is not the only country with a passenger duty, and unlike many other countries the UK does not levy VAT on flights."
Travel Warning