Positively the worst Airports in the World! 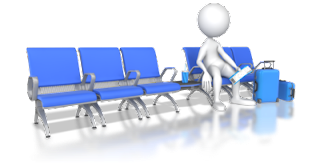 A mere 3 digit code like LHR, LAX, or CDG can strike fear into the heart of the best Perpetual Traveller and there is nothing worse than queuing up at the check-in, security or the gate of an unfriendly airport somewhere on the planet.

Airports are a necessary evil in the capacity of gateways to travel, as some of them, particularly the worlds major hubs are considered by the travelling public to offer an unpleasant experience. Recent security procedures have added to the pain, however its the temporary network of add-on terminals with little or no services that really gets our back up.

According to more than 2000 participants from over 80 countries who took the "World's Worst Travel Survey," conducted by the Titanic Awards here below is the ranked list of top offenders:
So yet another worst Airport report comes up with London Heathrow in pole position. In fairness Heathrow handles the largest number of internationally bound passengers in the world and it is the busiest airport in Europe, so sheer numbers play a part in the end result. Heathrow operates with no less than 90 airlines, which serve 170 destinations and 67 million passengers each year. Trouble is in the eyes of many passengers and the queues especially security take on truly legendary proportions. It must be said however that Terminal 5 is a revelation and we hope that Terminals 1-4 are upgraded to similar standards.

The second spot was reserved for LAX in Los Angeles, which is the worlds 6th most busy airport. Interestingly there is a "I Hate LAX" Facebook group and according to them, the airport's weak spots are as follows...

The 3rd spot is equally unsurprising in Charles de Gaulle CDG, the airport notorious for lost baggage. CDG features 7 satellites, a Atar Trek-like 70s-design, which is a navigational challenge for many of its elderly and disabled passengers. Clearly CDG has been on the worst Airport hit list for a while, as the SF Chronicle readers rated it the worst airport in the world in 2005, and in 2007 the The International Air Transport Association said it was "one of the worst," largely due to poor public service.

Of the remaining list, our PT editorial team feel that JFK was lucky not to be in the Top 3, otherwise the list offers no surprises. In some respects the volume of passengers passing through these worst Airports played a significant role in their selection, however it is high time that each of the above-mentioned Airports take corrective action, although the past 10 years shows few signs of promise with the exception of LHR Terminal 5.
Best of PT
Location: London Heathrow Airport (LHR), London, EN, UK