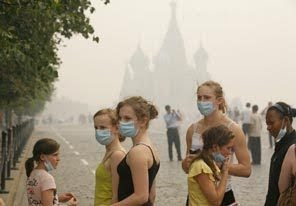 Moscow health authorities announced Monday that the number of deaths per day in the Russian capital had nearly doubled to 700 as the city and most of central Russia entered the seventh week of a heat wave.

Moscow health authorities announced Monday that the number of deaths per day in the Russian capital had nearly doubled to 700 as the city and most of central Russia entered the seventh week of a heat wave. High temperatures, hovering around 100 degrees on some days, have destroyed 30 percent of the nation's grain crops and triggered massive fires in forests and peat bogs that alone have killed more than 50 people and devastated dozens of villages.

Andrei Seltsovsky, chief of the Moscow health department, told a news conference that morgues were filled almost to capacity, with 1,300 of 1,500 slots occupied. He suggested that residents deviate from a Russian Orthodox tradition of holding burials on the third day after death, burying loved ones on the first or second day instead.

"We have no right to insist, as it is a sacred thing," Seltsovsky added.

Boris Revich, head of the Moscow-based Laboratory for Environmental Health, an academic research institute, was sharply critical of how Moscow officials have handled the twin crises of high temperatures and fire.

"The civilized world has already long ago formulated a list of urgent and obligatory measures to reduce heat waves' influence on people's health," he said, "from increasing the number of ambulances on duty equipped with all necessary things like bottles of mineral water, for instance, to getting lists of elderly people living alone from social organizations and checking these people out.

"None of it was done," Revich said.

He said the heat and smog were hardest on elderly people and those suffering from lung disorders. "Even after the heat is gone," he added, "these people will be suffering from the consequences, and we will see more and more deaths in the coming weeks."

As the Rosgidromet state weather agency said Monday that air pollution exceeded its normal levels by 1.4 to 2.2 times in the capital, residents continued to flee the city. All passenger flights and long-distance trains were booked, although dozens of flights were indefinitely delayed due to the smog.

Some foreign missions were closing their consular offices and evacuating staff members. The U.S. Embassy said Monday that work hours were being cut and that time devoted to issuing visas for travel to the United States had been reduced.

Many incoming foreign tourists already had canceled tours and hotel reservations. But low- and medium-priced hotel rooms don't stay empty for long; they're quickly booked by Muscovites willing to pay between $100 and $200 a day for the cool comfort of air-conditioned rooms.

Vyacheslav Kopylov, a 32-year-old programmer, said he was lucky to book a $120 hotel room for his pregnant wife, daughter and mother-in-law before they leave for a two-week Turkey vacation Friday.

"I can't risk the health of my family, and I am ready to pay the price," Kopylov said. "Our apartment is in downtown Moscow, but it is so hot inside that it is impossible to sleep.

"I hope the smog will go away by the time we are back from vacation and life will get back to normal," he said.