BA strikes to go ahead amid anger at 'talks via TV' 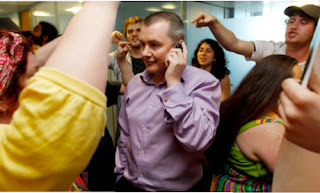 cabin crew is to go ahead tomorrow despite last-ditch attempts by the union to reach a resolution.
Tony Woodley, the joint leader of the Unite union, said the two sides had made "fantastic progress" during talks at the conciliation service Acas on Saturday, but he is believed to be furious after protesters from the Socialist Workers' party invaded the meeting, halting proceedings and prompting the police to be called.
Woodley described the incident as a "catastrophic" breakdown at a crucial stage in the talks, when he believed the two sides were close to a deal. Willie Walsh, BA's chief executive, also indicated that the two sides had "got close" to a resolution before the meeting collapsed.
Union insiders said they believed progress had been made over the 55 staff sacked or facing disciplinary action for their involvement in the dispute.
Although the union is believed to have held further discussions with BA by phone today, the airline said it had yet to comment on Woodley's offer, made in a television interview today, to halt the strike in return for the reinstatement of staff travel concessions – another key issue of the dispute. Walsh has previously indicated that he had gone as far as he could in offering a partial reinstatement of concessions.
Although BA said it is still "absolutely committed" to resolving the dispute, airline representatives are believed to be increasingly frustrated over union "to-ing and fro-ing" over whether it will negotiate. The first the airline heard of Woodley's offer was "live on the media", it said.
In a further indication of the frustration in communication between the airline and the union, Walsh accused Derek Simpson, the other joint leader of the union, of sending out live Twitter updates during Saturday's discussions, which Walsh said had undermined confidence.
Although both sides appear willing to talk, time is running out. The union said it intended to push ahead with the strike and two further five-day walkouts on 30 May and 5 June, threatening to disrupt the journeys of millions of passengers during the school half term.
The dispute continues as BA reported a record pre-tax profit loss of £531m last year – the worst figures since it was privatised in 1987. But Walsh said the airline wouldn't be grounded because of a small minority of people "who are clearly out of touch with reality". He said: "BA will survive and we will be stronger because we are tackling the core issues."
Last week BA managed to halt a strike due to start on 18 May after launching legal action over improper balloting of union members, but the court injunction was overturned following an appeal by Unite.
BA said it had put contingency plans in place and would be running 60% of its long-haul flights and around half of its short-haul flights from Heathrow during the strikes. Normal services will operate from Gatwick and London City airport.
A BA spokesman said: "We are disappointed that Tony Woodley has taken to negotiation through the media rather than through Acas. We had agreed to a request from Acas to meet this afternoon and are surprised that Unite did not take advantage of this."
Source: The Guardian
Perpetual Traveller Comment
It appears that the Unite Union along with a number of its Cabin Crew members want to press the destruct button and bring down British Airways. They seem to have a death wish for BA or they are totally out of touch with the current financial climate and the present era of great difficulty for Airlines.
It is not likely that current wave of strikes will ground BA, however times are tough and there is little public sympathy for what the Union is doing. Just to refresh you all, as previously reported BA Cabin Crew already have the best wages and conditions in the UK, so its totally perplexing why they are so determined to strike and cause such massive loss and disruption for BA and the poor BA passengers.
Clearly Perpetual Travellers, if the Ash Cloud from Iceland does not get you, the BA Cabin Crew will!