Last hope of travel dignity, privacy and convenience, as EU is not convinced about invasive Airport Body Scanners 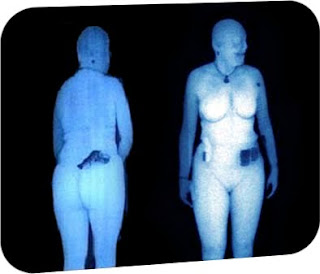 " for many the last hope of retaining some common sense and balance rests with the EU.

The European Commission is to publish an impact evaluation on body scanners in the coming weeks, as requested by Parliament in October 2008. Here below are some of the topics and statements made by EU representatives in recent months, which is a more common sense approach and pleasing to hear that at least there is one entity thinking the matter through.

Co-ordinator Gilles de Kerkhove. "Besides the importance of data sharing, there is a need to improve our ability to digest data coming from different sources" he added, as the Detroit attempt comes "mainly from a failure to connect the dots". "Much more can be done than deploying new devices in airports" to make flying safer, e.g. seeking an agreement with the US on sharing terrorist watch lists, Mr de Kerkhove also previously commented.

The report, requested by the European Parliament in a resolution voted on 23 October 2008, is to evaluate body scanners on the grounds of effectiveness, impact on health and fundamental rights.

Address "legitimate questions"
"We should not start with a no or with a yes" on body scanners, said Simon Busuttil (EPP, MT), but address "legitimate questions" on "quite intrusive instruments". "We would like to know to what extent they would be efficient (...) Will passengers have to be at the airport 3 hours before the flight leaves?" he asked, also voicing concern for the health of passengers and airport workers.

"Great cost implications"
"We have enough data" said Ernst Strasser (EPP, AT). He said that priority should be given to evaluating the existing instruments and making sure that tools such as the Schengen information system and the Visa information system are made fully operational. "It is never possible to predict what a terrorist would do", said Timothy Kirkhope (ECR, UK). He underlined the "great cost implications" of using body scanners, and advised against "putting burdens on airport companies", without the certainty that such scanners would even be useful.

"Violation of dignity"
Stavros Lambrinidis (S&D, EL) asked if the visa waiver agreement with the United States didn't include a transfer of terrorist watch lists to Washington, and if there was reciprocity with Europe. Antigoni Papadopoulou (S&D, CY) asked "how did the US fail to deal with information? We deserve an answer on that". She expressed concerns about the possible impact of body scanners on health, especially for people wearing pacemakers, and on "the violation of  dignity".

Cornelis De Jong (GUE/NGL, NL) said that "there is a great deal to be done in terms of prevention vis-à-vis third countries", and said that terrorism is also generated by "failure to deal with the Middle East problem". Andrew Brons (NI, UK) said that "military actions in Muslim countries" lead to radicalization, and that "we must have a genuinely neutral policy in the Middle East".

Transport Committee - nothing is 100% full-proof
Transport Committee MEPs, who also discussed the issue in the past confirmed that no technology could provide 100% security against terrorism and that airport staff training and better exchange of intelligence between security authorities should remain a priority. They also questioned the efficiency of body scanners in detecting explosives.

The Transport Committee is responsible for reviewing aviation security "implementing measures" put forward by the Commission. It can either approve them - in which case they are adopted - or reject them, in which case the whole Parliament has to confirm the veto within three months, by a vote in plenary.

European Commission Director General for Transport Matthias Ruete told the committee that "second generation" scanning technology had greatly improved since 2008, when Parliament criticised the scanners for being too intrusive and questioned their impact on health.

The Commission should put forward proposals for the introduction of body scanners within the next 6 months, but only if all questions relating to health and privacy are properly addressed and the technology is proved effective, he said, adding that the European Parliament would be consulted beforehand on all these issues.

Mathieu Grosch (EPP, BE) told the Commission Director-General that the Transport Committee would require the technical information about the new scanners in order to assess their utility and potential health hazards.

Saïd El Khadraoui (S&D, BE) underlined that body scanners could only detect objects on someone's body, not inside it. His concerns were echoed by Eva Lichtenberger (Greens, AT), who asked: "if we start using these scanners, terrorists will simply start swallowing the explosives - then what do we do?"

Gesine Meissner (ALDE, DE) agreed that "we cannot have total security, but if we can improve security by using scanners that are not harmful to passengers, we should seriously consider doing so".

Jacqueline Foster (ECR, UK) insisted on the need for better use of passenger profiling and intelligence sharing. "In the past, security authorities have been tipped off but have failed to act", she said. Philip Bradbourn (ECR, UK) agreed: "no matter how much technology you have, terrorists will manage to circumvent it." He quoted recent expert claims that body scanners would not have detected the bomb on the Amsterdam-Detroit terrorist, and said the problem lay in "systemic failure in exchange of information", as the US President had recently concluded.

All MEPs agreed with the Commission on the need for a common EU approach to the use of body scanners, in order to prevent a confused situation where Member States apply differing national rules.

Finally, MEPs asked who should pay for the technology, were it to be introduced. Small airports would find it very difficult to bear the costs, warned Jörg Leichtfried (S&D, AT), who is Parliament's rapporteur on the Commission proposal for a directive on aviation security charges.

The above conversations and statements by EU representatives show a balanced viewpoint of the issue and the legislation, which aims to lay down common principles for levying security charges at EU airports, will be put to a first reading vote in March 2010.  We as the traveling public can only hope that our liberties and privacy will be protected in addition to the convenience of travel restored. We urge the EU to take a stand and at Perpetual Traveller, we will keep you posted on developments, which could have worldwide ramifications.
Airports Aviation Security PT Privacy