Improve your quality of life with "The counter flow concept" 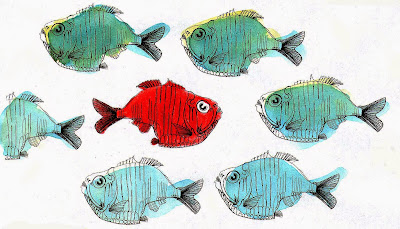 Whenever you find yourself on the side of the majority, it is time to pause and reflect.
Mark Twain
This article could change the quality of your life, optimize your general decision making direction and enable you how you organize your activities in addition to the way you experience life...

By good fortune I was raised during my early years in Singapore, which was my first exposure to the counter flow concept, although I was far too young to appreciate it at the time. During the sixties in Singapore my family enjoyed a life of relative luxury, with a large house and garden, a Chinese maid, an open-top Beetle car (highly sought after at the time) and the whole "La Dolce Vita" package. This seemingly paradise existence, which was normal life to me as a child, abruptly ended upon my family's return to the UK, whereby such proportional wealth evened out and we became one of the masses again. My education started, as society attempted to teach me "The Logical way" (listen to the Logical Song by Styx") of becoming some kind of follower within a box framed as society.

Something inside compelled me to resist and despite an unforgettably wonderful family life, my conditional education dragged on. As I reached youthful adulthood, flush with adventure, my spiritual intelligence drove me to revisit Singapore and Asia repeatedly, to recapture that childhood feeling and learn the meaning of life or at least make sense of it. Thereafter I travelled to all continents of our extraordinary earth as a young man with a Samsonite in hand (no back-pack for me) over the period of a decade, often living on a few cents per day, whilst studying the general flow of how things worked in each community and country I frequented.

What I learned and actively practised for the rest of my life and still today, is what I lovingly call "the counter flow concept". In essence, this means to analyse the given nature of a situation and broadly do the opposite to what the main flow or thrust of what other people are doing (often in a sheep like manner - lambs to slaughter concept), according to a certain criteria of course and respecting some exceptions.

Let's start with one of the most fundamental fabrics of life, where we are from! Most people believe they are born in a country and that is home, period. Think of this scenario though, what happens if everything goes wrong in your life, finances, country or home? Where would you go for back up that has a support structure? Conversely if you are a British Citizen for example, but live in Sao Paolo and suddenly the walls come down on your life and you are under economic threat or physical danger, you can always go back to plan B and return to the UK. If you fall foul abroad, oddly you country of birth is more likely to help you when you are overseas, maybe even President Clinton will fly to your rescue! Being a minority foreigner in a country can present all kinds of advantages and benefits if one is able to see them and is tuned in. So the golden rule of being a Perpetual Traveller is not to be where you are from!

PEAK - OFF PEAK
Peak holiday season secures the fact that you pay considerably more and the resort you visit is likely to be highly crowded, causing queues, additional waiting time and a overall loss of service. Alternatively if you travel off peak when the sun still shines, you can enjoy better service, less crowds and a higher potential of upgrades all at a lower price. Then of course you will need to beat the school holidays paradox!

CITY – BEACH
If you are forced to travel in August (peak season in Europe and parts of the US), then consider following the path of counter flow, by visiting a city instead of the beach. Great deals can be achieved in business Hotels in attractive cities such as New York, Miami downtown, London, Paris and Barcelona during the traditional summer high season of the Northern Hemisphere. In Barcelona and Miami a beach will be on your doorstep too. In Paris there's the 'Paris Plage' river beach and there is always the option to mix some culture with a day trip to the coast from London or New York.

WEEKDAYS - WEEKENDS
Pleasure Hotels are generally expensive and popularly packed at weekends and it’s a similar story for pleasure flights. So orchestrate your life to take breaks over weekdays and consider working over the occasional weekend. Take a day in lieu for example.

Conversely Business Hotels and Business flight routes are costly and busy during weekdays and cheaper in addition to being more pleasantly quiet over the weekends. So simply look at the market and select counter flow options and use your imagination.

Now is the best moment for literally decades to purchase a property in Europe and America, so if you have the cash or can access credit, go for the opportunity, it has rarely been better in our lifetimes.

One needs to set a criteria when making big commitments like property though, which essentially translates to purchasing in the best locations of long established real estate markets, which will likely bounce back first. London, New York and Dubai are ideal candidates.

The recent global recession is case in point. It started with overly courageous sub-prime property bank loans that enticed the masses to buy property, that otherwise would not have been legible. This over hyped the US and later the global property market causing a partly false boom. After every over-hyped boom, comes a bust and in 2008 a series of inter-connected global dominos collapsed, which brought about the point of the best buying market for as long as most of us can remember.

There are of course many other examples of the counter flow concept. The most crucial factor of learning how to practice this concept is to obtain an out of the box big picture thinking (read up on the Pareto Principle) with a longer-term perspective. The reality of today's instant world is locked in the short term whereby the majority of people have little patience for economic cycles to run their course.
Health
Location: London, UK