The cultural shame and outrages of MASS Tourism 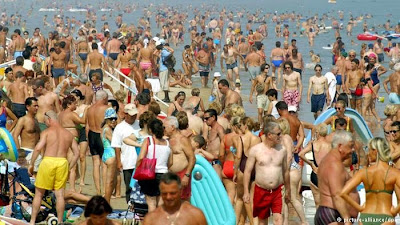 As the summer of 2017 kicks in, this article is more poignant as ever!

Tourism is the greatest industry on the planet and until the 2008 and 2013 recessions kicked in, world Tourism growth was rising at an approximate rate of 8% year on year. In order to achieve such massive Tourism growth across our planet, the mass market had to be penetrated by essentially Tour Operators, Airlines, Cruise Lines and more to the point Budget mass market operators. Expansion plans in the last two decades have reached historic proportions in most parts of the world, competition became ever greater in the global village and it seemed that every country had a brand, a power message and wanted a piece of the action. Tourism no doubt has fueled economic growth, but there is a dark side too, which is the essence of this article.

Mass Tourism means in reality that not all the people travelling are sufficiently educated on the previously respected customs, etiquette, traditions and expected social behavior of the destinations they are visiting. Some of the behavior and ignorance we see in resorts around the world is staggeringly bad. We have all been there at the Buffet in an All Inclusive termed as "all abusive" or a mega Cruise ship, with all-you-can-eat buffet lunches and dinners with Hamburger and Hot Dog grills, piles of Pizza slices and stainless steel dishes to scoop the food up from. We are living in a world of the 24 hour stuff yourself food culture with an attitude of "I've paid for it so I will eat it!" No wonder obesity is so high in the western world!

What is it with our fellow travellers today? You can always tell the level by the questions asked or the statements made. Here are some classic examples...
From the couple caught having sex on the beach in Dubai to the Hooligans that travel abroad for European Cup football matches, the situation is only getting worse, especially so on board Low Cost Airlines.

What's more interesting is that people in the business are starting to categorize tourists. Here are the 5 core types on mass tourists...

1. THE ABSOLUTELY STUPID TOURIST
From the all-inclusive resort culture around the world to the rising mass popularity of cruising, it's unlikely that you will find a more impressive collection of brain donors and dorks anywhere else. Apart from the nauseating buffet line, once these so called Guests set sail, they get rat faced (especially if on an all inclusive plan) and act like drunken yobs. Some of those on Cruise ships even jump overboard and since 1995, there have been more than 100 documented cases.

2. THE OUTRAGEOUSLY RUDE VISITOR
Typical examples of these are the vacationers that cut in line, drive like Formula 1 drivers on a track and whereby the words "please" and "thank you" are simply not in their vocabulary. One city at least has figured out a better way of dealing the unmannered masses. Bars and Restaurants in Venice for example have an unwritten law of 3 price lists...
So if you're Italian, a croissant and a cappuccino might cost in the realm of 3.50 euros, but if you order in English and impolite, you can pay up to 10 euros. Of course it's more in St Marks square!

3. THE OVERLY OBNOXIOUS FRENCH & AMERICANS
Let us be clear and sincere where this is concerned. Having lived personally in America and frequently visited France, I know that there are many decent intelligent people there and most really love their country; these are not the ones that stand out when abroad though! Its the Americans and French that capture attention with their boorish antics that make us cringe. By habit, obnoxious people are loud, demanding, arrogant and insensitive to local culture, customs, traditions and possess no empathy for other people. Interestingly, according to an Expedia survey that was published in Newsweek, it discovered that the French, Indian and Chinese tourists were ranked even more obnoxious than Americans, whereas the Japanese were considered the best tourists.

4. THE ABSENT-MINDED VISITOR
These are the type of Tourists who get left behind at the gate because they didn't know that they needed a passport for an international trip. They habitually never call to confirm a scheduled flight and miss it because it was rescheduled or fail to confirm a Hotel reservation. Such absent mindedness causes them not pay attention to where they parked at Disney World or Epcot Center for example. I have seen them wandering around the car park after dark, hoping to stumble upon the car they rented, when they cannot even remember the color, let alone the model. We all make mistakes though and certainly there is something about being on the road, away from all things familiar and out of ones element, that turns one into being a little bit dozy or lets be nice and say "not on form".

The challenge comes when people try to blame everyone but themselves. We have likely all witnessed tourists accuse their travel agents or cruise line of destroying their vacation, because they were not properly informed about a visa requirement or a key aspect of the holiday. The harsh reality is however, that securing the proper paperwork is solely the buyers responsibility and we should all do some research before travelling.

5. THE YESTERDAY TRAVELLER
This category of people, need to get out more frequently and they relate the current reality to yesterdays world. Here we can expect them to call the flight attendant and ask "what is on the in-flight menu?" The answer, unless they are sitting in business or first class, is a staunch glare, followed by orange Juice and peanuts or a pay to eat and drink trolley.

The yesterdays world time travellers are either unaware that the airline industry was carelessly deregulated in 1978 or they are in flat denial. Such travellers do not necessarily make themselves look so bad, as much as they illustrate how low Tourism has fallen since a former era. Only the most die hard airline apologist would argue that flying is a better experience today than it was 3 decades ago. Our yesterday travellers are a constant reminder of the sad airline decline of America and Europe. If you are reading this as an optimist, they also help us see what air travel could one day become again with a return to former glory.

Counting the cumulative damage
So how are these tourists damaging Tourism?

When an inebriated tourist or wanna be rock star trashes a Hotel room, you can cost it into the service. However, when that same person travels ashore in a foreign port and makes all of their countrymen look like xenophobic elitists, it costs us all with a poor perception and in ways that are difficult to quantify, though no less real.

People who make unreasonable demands on the system raise the cost of travel for everyone, because we will all end up paying for the army of lawyers the travel providers must hire to defend themselves from frivolous claims. Also if everyone wants travel to be cheaper and cheaper, it will degrade the travel products available and damage the reputations of the destinations involved. Many of you reading will have all heard of the term "poor mans Caribbean" or may seen the series "Benidorm" on TV.

What can we do about it? Not a lot really, apart from avoiding all inclusive resorts and low grade cruise ships, whereby the product has been cut to bones. Or perhaps by writing articles like this one and by demanding quality from the travel providers or to encourage countries to demand respect for themselves by better managing unwanted visitors. Let's hope that the current recession gives the travel trade a window of opportunity to reform.

We encourage your views on this article?