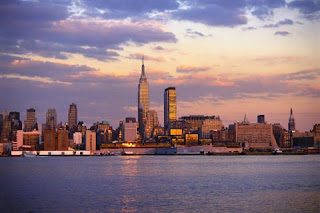 In spring and summer a new trend is taking tourists to the roofs: spectacular views, cool refreshment  and the high life, in grand style or in perfect silence, on the terraces and in the parks of the Big Apple

The city that never sleeps, and which in 2008 attracted a record average of 47 million visitors, is reaching even further for the skies—and we’re not just talking about the architecture tracing its skyline. To welcome the good weather, escape the scorching heat, admire the view or just enjoy the luxury of the 21st century—silence—the new thing to do in New York is meeting on the terraces of the highest buildings. Museums, bars, restaurants, hotels, or private clubs with pools like the one at SoHo House, if you’re one of the lucky members. “New York is a particularly vibrant destination in summer and we want to make sure people know about these hidden pearls, these exclusive yet accessible spots that visitors might miss out on just because they never heard about them,” explains George Fertitta, CEO of New York & Company, which handles the city’s tourism marketing.

As the temperatures soar, New Yorkers move up to the top floors

One of the most popular high-rise destinations is the Salon de Ning at the Peninsula hotel on the corner of Fifth Avenue. In its eclectic and cosmopolitan atmosphere, people sit on canopied Chinese sofa beds and sip Ning Sling cocktails made from lychees, fruit juice and Absolut Mandarin. It’s the haunt of top names in fashion and publishing, but it’s also popular with young creative types and showbiz celebrities like Lindsay Lohan and the cast of Sex and the City (see box). Just a short walk away is Le Parker Meridien, a hotel which is opening an outdoor area in spring, with a delightful covered pool, on the very last floor and overlooking Central Park. Lovers of genuine Italian espresso coffee will be interested to know that Le Parker Meridien serves the best in New York. The view of the Hudson River and on the Meatpacking District, where packaging meat has given way to lofts, galleries and fashion shops, is best admired from the terrace of Plunge, the bar in the Gansevoort Hotel. This is the place to be when the sun sets, trying Japanese specialities washed down with a Champagne Mojito. If you prefer walking to standing or sitting, just cross the road: this spring sees the opening of the High Line, an old elevated railway line 10 metres off the ground, with parks and shops, connecting the Meatpacking District with West Chelsea. Built in the 1930s to transport goods, it was later abandoned, and today it promises to be one of the most interesting and enjoyable open-air walks in town.

Art on the roof for the curious and the connoisseur

The cherries on New York’s terraced cake are definitely the panoramic rooftops over the museums. There’s the New Museum of Contemporary Art, which stands out on the Bowery. Until recently this was a depressed area, but today it is one of the most fashionable artistic neighbourhoods. The museum building’s architecture is candid, resembling an irregular pile of boxes, and the museum itself exhibits only avant-garde art. You’ll find a wider range of art at the Metropolitan Museum, which boasts one of the most popular terraces in New York, and not just for its colourful and perennially-popular installations, from dogs to hearts in fluorescent aluminium by Jeff Koons. The view of the skyline and Central Park is incredible from every angle.

Zen serenity and green surroundings: far from the madding crowd in Central Park

The open-air city par excellence is the city that offers the opportunity to live in green surroundings. But some who go to Central Park prefer to avoid the crowded pleasure spots like Strawberry Field, with its echoes of the famous Beatles song, or the Lake Boathouse, jam-packed with boats for hire. The Jacqueline Kennedy Reservoir Path, where the First Lady loved to walk, and the Conservatory Garden are the places that attract nature-lovers and discreet joggers. Here you can do bird-watching, relax on the benches, discover what flowers are in bloom or retrace the footsteps of Woody Allen: most of Annie was shot right here.

It’s official: the four girls from Sex and the City, the biggest TV series of the last 20 years, are returning in 2010 in a film about the global financial crisis. “Times have changed,” explains Sarah Jessica Parker. “The last time we told you a sophisticated story about broken hearts. But now we really want to blow your socks off.” You can relive the girls’ adventures today by taking a tour led by young actresses with “On Location Tours”. You’ll begin in front of the Plaza Hotel, where Carrie said goodbye to Mr. Big, and the tour takes you right across the city. From the New York Public Library, where the two were supposed to get married, to Charles Street, in the Village, dove the blonde Carrie lives and, nearby, where Sarah Jessica Parker herself also lives. Next stop the Magnolia Bakery for cupcakes, the TAO Asian restaurant and some serious shopping meccas: Jaime Mascarò (shoes), Diane Von Füstenberg (clothes), ABC Carpet & Home (furnishings).

CLIMATE: as in the other cities in the American northeast, the climate is continental and varies from hot and humid in summer to freezing cold in winter (and often foggy as well). Autumn and spring are variable.

GETTING AROUND. A visit to the Catskill Mountains, 160 km from Manhattan, is especially recommended in autumn to see the changing colours of the foliage. Seaside lovers shouldn’t miss the Hamptons, and shopaholics should head for Woodbury Common Premium Outlets, an hour away to the north and well served by a coach service. Art lovers take note: around an hour by car or train from Grand Central Station, following the route of the Hudson River, is the Dia:Beacon. Once a factory run by the Nabisco biscuit company, today it is one of the temples of contemporary art.